Welcome to our Annual Review for 2015

There were some major highs, such as the finalising of our merger with a sanctuary in Scotland, and some incredible rescue cases including our work to help the horses and ponies of Bodmin Moor; but there were also lows, including the sad loss of some new arrivals, and a major outbreak of strangles at the Sanctuary which had a huge impact on our operations.

I am particularly proud of the merger with our Scottish neighbours at Mountains Animal Sanctuary. It was an incredible amount of work over more than two years, but so rewarding as this was the first of its kind under new charity law and was secured in order to see the best outcome for the Mountains resident horses, ponies and donkeys, not forgetting Blue the mule!

Thank you again for all your kind support and I hope you enjoy reading our Annual Review for 2015.

A meeting of the minds!
On 27th January 2015 at 1am, following over 30 months’ work, Redwings Horse Sanctuary merged with Mountains Animal Sanctuary in Scotland. 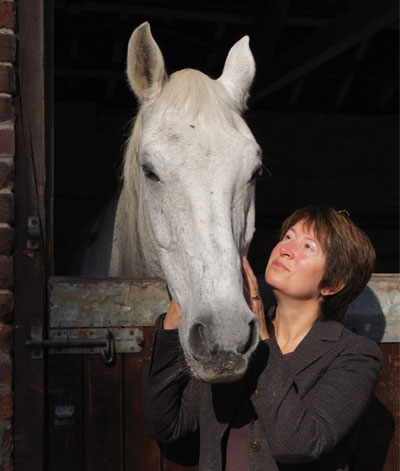 The sanctuary based in Forfar shares our passion for the care and protection of the UK’s horse and donkey population, as well as a similar heritage, having – like Redwings – celebrated their 30th anniversary in 2014, so this merger really is a meeting of two minds. The merger is also the first of its kind under new charity legislation governing mergers between English and Scottish charities so it’s an exciting milestone in both of our histories. 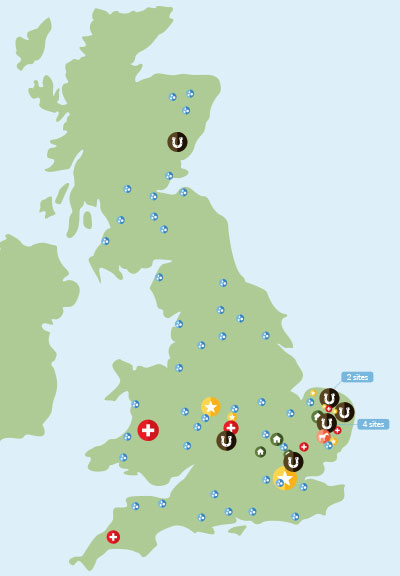 In 2015 we rescued horses from counties including Essex, Norfolk, Bodmin Moor, Suffolk, Wales and Warwickshire. We rehomed horses in East Anglia, Bedfordshire, Hertfordshire and Buckinghamshire. 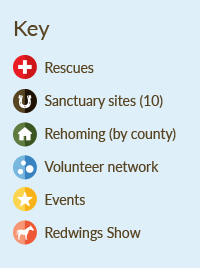 Where possible we try to help horses remain in the care of their owners through providing advice. During 2015 our welfare helpline team gave advice to owners 1,417 times. The team also responded to 188 email and written enquiries and our field officers investigated 239 welfare concerns (a 19% increase on 2014). While the number of calls to the helpline has decreased, we have seen a rise both in the time spent per call and the complexity of the issues being dealt with.

However, although we would always prefer to give advice and see a horse’s circumstances improve, there are times when we have no choice but to step in and rescue that animal. In 2015 we took 160 horses and donkeys into our care, despite the ongoing challenge of operating close to capacity, which has meant we have had to use external boarding facilities to supplement spaces within the Sanctuary. At the end of the year 47 horses were still living in these boarding establishments, awaiting an arrival date.

Download our PDF to read all about our recent rescues and the outcomes of successful cases, including:

Did you know? Redwings have been involved with the situation on Bodmin Moor since 2011 and we have recently taken part in a DEFRA consultation on the establishment of a Bodmin Moor Commons Council to try and improve overall welfare standards of grazing animals on the moor and to resolve issues such as the lack of an established register for those who have grazing rights, not to mention the problem of indiscriminate breeding.

Redwings has a specialist team who focus on leading on our rehabilitation and equine behaviour work. The team cascades out our approach to horse training across the organisation to ensure consistency of handling and a positive experience for our rescued herds. We take in behaviour case referrals from other organisations and our work during round-ups is built around our extensive efforts to understand the behaviour of feral herds. Once in the Sanctuary, however nervous they may be, we work towards them never needing sedation to have routine veterinary interventions or for farriery, which is safer for the staff and much less stressful for the horses.

Our specialist behaviour team is keen to share their knowledge and have advised other equine welfare charities, had peer welfare workers spend time observing their work, and have run their own internal training programme for our staff. All new staff have equine behaviour training from day one, which is aimed at embedding our ethical training approaches and ensuring all staff are safe in their work. 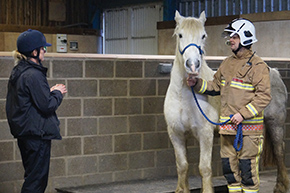 Create your own PDF to read the full story of how we have been working with some very special horses, Almond, Ameria, Missy, Wilf and Stanley.

Any horses that have been retired or require lifelong specialist care (veterinary or behavioural) will always remain in the direct care of Redwings although depending on their needs, some may be rehomed as companion horses. Healthy younger horses that have the potential for a working life can learn to be ridden at our purpose-built rehoming centre in Norfolk or at Redwings Ada Cole in Essex, and then they are found a suitable foster home (‘Guardian’ home). As of the 31st December 2015 we had 423 horses out in guardian homes. This is less than 2014 (445) as many of the horses out on loan were geriatric and some passed away in 2015.

Redwings always retains ownership of every horse for the rest of its life so if a guardian is no longer able to provide for them, or if our regular checks show that a high standard of care is not being maintained, Redwings will step in and return the horse to the Sanctuary. Our welfare officers performed over 400 checks on rehomed horses in 2015.

Create a PDF to read about some of our rehoming success stories, including:

Zig Zag the pony who has been rehomed to Ebony Horse Club, a community riding centre in Brixton, South London, improving the education and aspirations of young people through horses.

Crumpet and Honey from our Breakfast Club rescue who have now found loving new homes.

Did you know? This year our team started learning biomechanics with trainer Nicky Donohue and the principles of equitation science training were passed on to all staff to ensure we are all using the most ethical and scientific training techniques possible for our horses.

Redwings provides permanent sanctuary care to over 1,500 horses, ponies, donkeys and mules who have often suffered neglect or come to us from difficult circumstances. Many of our permanent residents cannot be rehomed, often because they require lifelong specialist care (including significant veterinary costs that might be beyond the reach of a typical owner) but can still enjoy a good quality of life at Redwings.

We always strive to maintain the highest possible care standards and we have an Internal welfare group dedicated to continually monitoring our internal care processes. We encourage suggestions from staff on how we can best deliver our day to day care and we run Internal Welfare Seminars sharing our horse welfare and care knowledge and our veterinary expertise.

Lovely Tilbury, rescued with a terrible skin condition, who we have nursed back to health.

Adoption Star Esther who had major surgery on her hoof thanks to our in-house vet team.

Did you know? Following our largest ever rescue in 2013 when we rescued over 170 horses from a site in Wales they have been slowly arriving at the Sanctuary from the external boarding yards where they were being temporarily housed. The last of the horses arrived at the end of 2015 and although a few were sadly too poorly to be saved, more than 160 are now living happy lives here in our care.

Rather than having to rescue horses and donkeys from abuse, abandonment or neglect, Redwings would prefer that every owner had the knowledge and commitment to prevent their animals from suffering in the first place or from taking on an unsuitable horse for their situation.

Our teams work with a wide range of people to help disseminate information and promote equine welfare.

We work directly with educational groups, including schools, universities and colleges as well as local community groups, giving talks and lectures and offering visitor experiences to educate on key welfare issues such as parasite control, geriatric care, nutrition and farriery. We also hold regular seminars on veterinary care issues.

Download a PDF to find out all about our work with schools and colleges for their Outdoor Learning and Land Management programmes, and our evening veterinary seminars for horse owners.

Did you know?
Redwings has now started campaigning and in May this year we saw the Control of Horses Act come into force in England following work by us and other agencies and charities. Similarly to the Control of Horses Act (Wales), which came into effect in January 2014, this new legislation gives greater powers to English authorities to seize illegally grazed horses. The Bill also provides greater reassurance for landowners who find themselves victim to fly-grazing in significantly reducing the lengthy and expensive process of removing the horses from their land; under the new legislation, the authorities will be able to take action after four days rather than a minimum of two weeks as it was previously.

In 2015 we launched an appeal relating to our strangles outbreak, which was our best fundraising appeal in several years and gained more support from our loyal donors than even our appeals to help tackle the UK abandonment crisis. The threat to our beloved herd, those horses that our supporters had saved, really struck a chord, with donations doubling in size and volume. It was especially amazing to receive so much support during a time when charities were being scrutinised by the media.

As an organisation funded by donations from the public we have always been very honest, respectful and professional when it comes to how we fundraise, and we are proud to say that not many changes were needed. We do not sell or share data and only communicate with those who are willingly to hear from us and who have provided us with their contact details. We are fortunate that most supporters meet us through a visitor centre or by adopting a horse which means we do not undertake unsolicited ‘door drop’ mailings, telephone fundraising or street fundraising.

Download a PDF to find out about our historic court case which will help ensure the wishes you make in your will are honoured.

Did you know? At the end of 2015 we launched a new volunteer programme, with opportunities to get involved in helping us with our administration or at our visitor centres around the UK.

Our income and expenditure in 2015. 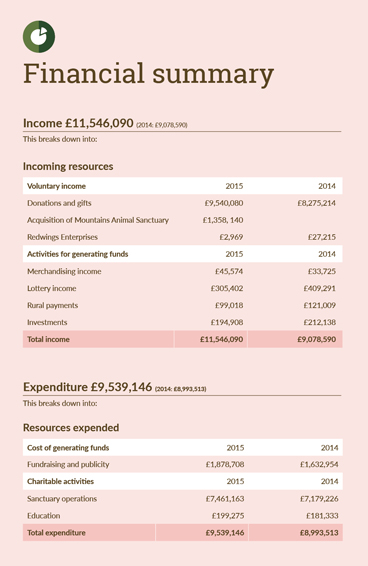