It has been a year of highs and lows, of tough decisions in an emerging equine crisis, coupled with so many horses’ lives improved, thanks to our amazing staff and kind supporters.

This year we rescued 161 horses, ponies and donkeys and brought them into the care of the Sanctuary, enrolled 300 onto our specialist handling scheme, rehomed 91 horses into loving Guardian homes and cared for over 1,200 horses on a daily basis at our sanctuary sites across the UK. 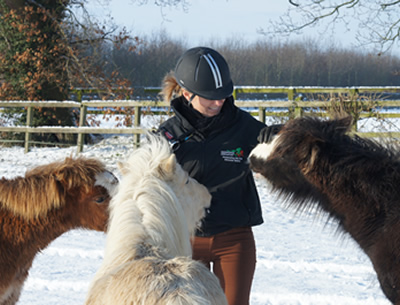 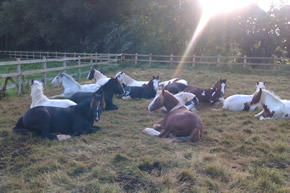 We have also educated 2,000 people on horse welfare, microchipped and passported 221 horses at clinics around the country and opened a brand new visitor education centre in North Norfolk. And that’s just for starters.

This website contains highlights from 2012’s Annual Review. If you would like more information about what we got up to that year, click here to download any section of the full Review as a PDF. 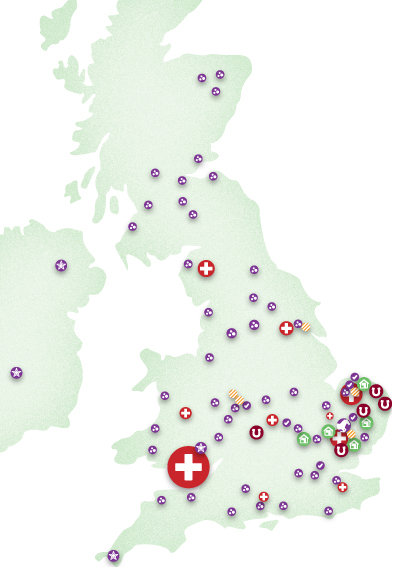 In 2012 we carried out rescues across the country, helped out smaller charities, rehomed horses across East Anglia, attended events, worked with horse owners to offer education and advice, and even put on the biggest Redwings Show yet. 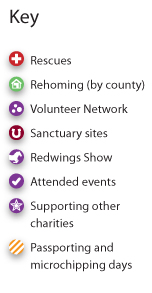 As the largest horse sanctuary in the UK, Redwings has been operating at or near capacity for several years, but 2012 was particularly pressured and we finished the year on December 31st with an astonishing 1,232 horses, ponies, donkeys and mules in our direct care.

In 2012, we brought 161 horses, ponies and donkeys into our care, of which 124 were brand new arrivals and 37 were returns from guardian homes – another symptom of the financial pressure that horse owners are currently encountering. The 124 new arrivals were rescued from all over the country, including Essex, Yorkshire, Norfolk and Cumbria, with 44 arriving in two intakes from South Wales. 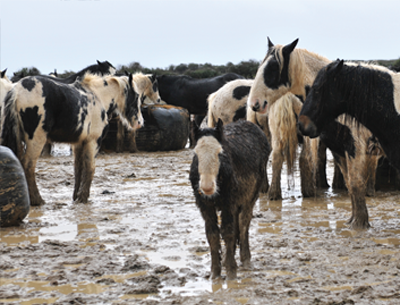 In 2012 we rescued 44 horses from a number of sites in South Wales to assist the local authorities in what had become an unprecedented case of illegal grazing, straying and abandonments. Horses had even been found grazing at Cardiff airport!

To find out more about these cases and others, create your own PDF of the Annual Review or visit the Rescue section on our main site.

Our specialist handling team spend time working with the horses who come to us with long-term emotional or behavioural problems, usually as a result of their traumatic past or incorrect training when they were young. Some are so extreme that although they will improve vastly in our care, they may never come to a point where they could fully enjoy the experience of being around humans.

Increasingly at the Sanctuary we are also dealing with youngsters. In fact, the nature of our profile is changing. Whereas our population in years gone by was made up of largely veteran horses, 56% of Sanctuary residents are now under 15 years old, mainly due to the numbers of large rescues and round-ups we have been undertaking, which can be comprised of ponies of all ages, including foals! 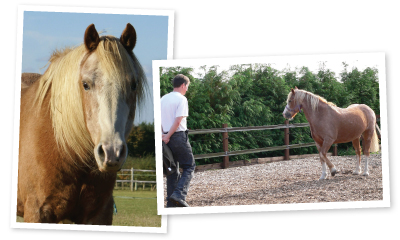 In 2012 we introduced a brand new Youngster handling programme to deal with this growing population of youngsters. From basic handling to essentials such as having a rug on, to the first stages of being ridden, such as the feel of a saddle on their back. Those that take to it will then be able to progress to our Rehoming Scheme with the minimum of anxiety.

Create your own PDF of the Annual Review to read about some very special rehabilitation cases:

Those horses that have been retired or require lifelong specialist care will always remain in the direct care of the Charity. Depending on their needs, some may be rehomed as companion horses. However, healthy younger horses that have the potential to enjoy a working life can learn to be ridden at our purpose-built Rehoming Centre in Norfolk or our Ada Cole centre in Essex and then found a suitable foster home. 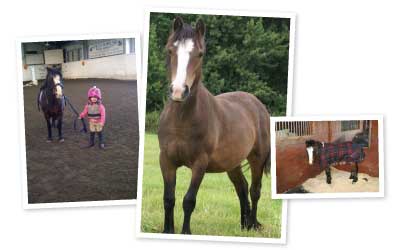 During 2012, 48% of our new arrivals were aged under three years, and 14% between four and eight. Those youngsters who cannot be rehomed for health reasons will need a home in Sanctuary care for life, placing an increased strain on our resources. Rehoming those that we can rehome enables us to make more space for the horses out there requiring our help.

Redwings in Action – In 2012 we hosted our fourth Redwings Show at Topthorn in Suffolk. We had over 340 class entries, an incredible number and classes included qualifiers for the Royal London Show, TARRA and the Veteran Horse Society, but the highlight of the day was holding a special parade for our guardian ponies!

Create your own PDF of the Annual Review to meet some of the horses we rehomed in 2012. Including:

For more information about rehoming and our Guardianship Scheme, please visit the Rehoming section on our main site.

It’s an idyllic scene. Acres and acres of horses and ponies grazing and playing in beautiful surroundings. It’s all too easy to forget that these horses have come from difficult, and sometimes horrific, circumstances – we believe that the chance to live a quiet and natural life in our care is exactly what they deserve.

At the end of 2012 the number living that life at one of our sanctuary sites had reached 1,232, that’s a lot of mouths to feed and feet to trim!

The number of these ‘places’ we have available depends on the needs of both our existing residents and the needs of the potential candidate(s) for admission. Life is a constant challenge as itâ€™s often not until we admit a horse that we establish its true needs. A thin mare may be pregnant without it being immediately obvious, an apparently healthy youngster may have long-term issues brought on by poor nutrition when it was young.

Redwings has a high population of golden oldies too, with 24% aged between 15 and 20, and 20% aged 21 and over. Veteran and geriatric horses by their very nature are more demanding; they require a higher level of care and support, such as more feeds and regular dental treatments. They certainly keep our teams busy but we firmly believe older horses have the right to a good life!

While each of our sites operates on a large scale, we believe every horse is unique and try to reflect this in the care that we provide. It can be quite a challenge at times!

Create your own PDF of the Annual Review to meet:

For more information about our sanctuary care, please visit the Sanctuary section on our main site.

With so many horses out there in need of help, and with the charities full to bursting with rescue cases, educating owners to prevent overbreeding and reduce welfare problems has never been so crucial.

In 2012 we worked with 30 school groups and gave ten talks to equine colleges and on behalf of private vet practices. In total we reached around 2,000 people through group visits and our outreach programme. 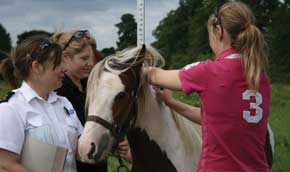 We appeared in the press 589 times in 2012, including articles on horse abandonments on BBC Wales and in the Independent on Sunday, and two appearances on the children’s programme Dick and Dom Go Wild.

Our educational work is complemented by welfare leaflets, a twice-yearly newsletter and ‘Young Redwings’, our magazine for supporters under the age of 16. In recent years we have also placed more emphasis on web-based material and social media, enabling us to communicate directly and instantly with supporters and members of the public.

To find out more, create your own PDF of the Annual Review. To access resources for kids and teachers, please visit the Education section on our main site.

Fundraising is an integral part of running the Sanctuary. We have a small in-house fundraising team that works hard to communicate with supporters, attract new ones and ultimately generate income for the Sanctuary. Over a third of our supporters make regular contributions to our work.

Income continues to be received from general donations and specific appeals, legacies, lotteries, our four visitor centres and through our Adoption Scheme. In January 2012 we launched four new adoption equines providing a much-needed boost to what we believe to be the longest running animal sponsorship scheme in the UK.

The primary interaction with our supporters is through newsletters and bulletins each year and with increasing web contact through email newsletters and social media such as Twitter, Facebook and YouTube. Nearly 9,000 people now receive the Redwings newsletter in email form in addition to or instead of the paper updates, enabling us to reach our donors in a more immediate and environmentally friendly way.

Redwings in Action – The end of 2012 saw the opening of a brand new visitor centre at Aylsham in North Norfolk, our fourth centre that is open to the public regularly. Redwings’ visitor centres have several functions – not only do they allow us to showcase our work but they are fantastic places for education on horse care and for us to engage with the local community too. 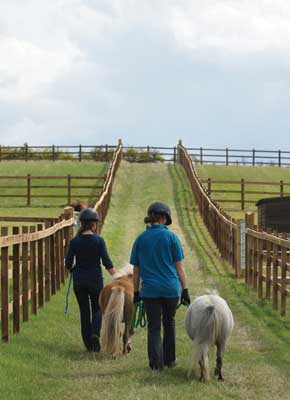 Read more about our fantastic fundraisers by creating your own PDF of the full Annual Review. To find out how you can get involved, please visit the Fundraising section on our main site.

Our income and expenditure in 2012.